So I was going to blog more than once last week. But then the first counselor to the bishop (in Mormonese this translates to the main pastor’s right hand man) called me on Wednesday night and begged me to “save his bacon” by speaking in church on Sunday. And, even though that only gave me three days– minus the two spent procrastinating thinking about the topic (which, btw, was speaker’s choice)– I said yes. Mostly because Br. Counselor Man distracted me with the word bacon.

Also, did I mention, I just spoke three months ago? So really, I should have been exempt from the task for at least another year.

Luckily, I already had a topic I’d been itching to call people to repentance for, so it wasn’t too hard to throw something together last minute.

The topic you ask: Reverence.

And our ward’s lack of it.

Which I hadn’t really noticed until I went to some other wards and realized that the people at the podium were saying words I could hear, not just moving their mouths.

And my talk went pretty well, considering I didn’t get my last run-through in due to the super glue fiasco wherein my fingers were temporarily stuck to the shoe that had to be fixed in order for me to deliver my sermon.

FYI:  Cute shoes are essential when you are about to reign down fire and brimstone.

It probably helped that my talk sounded a lot less judgmental than this post. And maybe it helped that I shared war stories from my own hard fought battles involving reverence and offspring. Like the battle that changed from something akin to that funny quip seen on T-shirts worn by the fashion-challenged that says “the beatings will continue until morale improves” to something closer to “be thou an example.”

After I finished speaking there were some standing ovations, requests for autographs, and suggestions that I speak every three months at least (no, thank you). Okay, so maybe it was just the last one, but I did feel a little like the ward rock star. And the egomaniac in me suspects that next week our sacrament meeting will look more like this:

and even the babies will have their arms folded:

But the realist in me knows it will probably look like this:

But I could’t find a picture depicting that – believe me, I tried- so you’ll just have to imagine about 4,000 people–3,900 of whom are screaming/crying/spitting/fighting children — crammed into one chapel + overflow + cultural hall (which is a silly name for a basketball court) + hallway and you’ll have a pretty good idea of what my ward looks like on a typical Sunday.* 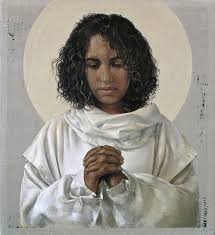 Because if there’s one thing I can’t stand, it’s a hypocrite.

* This is not my baby. I don’t currently have one of those, niether have I ever had, nor do I intend to have, a baby of the male persuasion. His arms aren’t even that folded. Just used the pic because, who doesn’t like a cute baby?

** For my friends who have never been to an LDS sacrament meeting, we are not a mega church so our buildings do not hold 4,000 people at one time. Thus, I may be exaggerating the size of my congregation.

But not by much.

8 thoughts on “The Beatings Will Continue Until Reverence Improves”