My plans to blog keep getting thwarted. This past Saturday, I should have been writing something pithy and original– perhaps even life changing. Something groundbreaking. Like how kids (namely mine) fight in the summer.

Instead I cleaned my kitchen. Partly because one of my kids was stuck to the floor in there for quite some time. But mostly because I invited a friend I hadn’t seen in fifteen years to come to my home and thus I had to create the facade that 1) I am a super housekeeper or 2) I am wealthy enough to have a cleaning lady.

I’m hoping she thinks #2, but not #2 + “she should find a better cleaning lady.” But in reality she probably didn’t even notice because I forgot to make her go on a tour of my house to show off its cleanliness.

Some of you may know my friend Kelly because she has a very funny blog here. But I knew her first because I met her seventeen years ago when we went to London during the summer of 1994 on a BYU study abroad program. And that was before blogs. Or even the internet (I am purposely not making the requisite Al Gore joke here because I happen to like the man).

And maybe you remember her post that referenced a smokey nine hour bus ride to Scotland — if not it is here. You should read it.  Then come back here.

All done? Well, I was on that carcinogen loaded bus and, not only do I have the scarred lungs to prove it, but also this picture of us waiting to board the bus:

See that girl with the totally high-tech walkman? That’s me. And that other girl rockin’ out on her headphones? Not Kelly. It’s her sister. But Kelly is the one standing on her left in that cute dress that would sometimes come unbottuned as we were running to plays, or church, or other things you should be on time for.
Also,see that guy standing behind me? I totally made out, held hands, talked about his mission and the best way to get to the Celestial Kingdom on our entire red-eye trip to the land of Scots. Also, I married him about six months later–because how could I resist those sideburns?

So we had a mini-London reunion of sorts, the three of us, plus Kelly’s husband– who we like, despite his not being an original member of the London ’94 club– and 1/5 of her children. We had lots of fun and I liked it when she said we had not changed at all.

But I think she was maybe being nice. Or she is forgetful. Because here we are then: 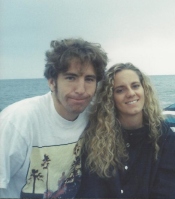 ﻿And this is us now:

And this is the picture I (or maybe somebody else) took of Kelly and Jake (or possibly other people found on Google images under “attractive couple” because I actually forgot to take pictures, but you get the point.):

We would be jealous of their stunning good-looks except that they have added “visit Larsens” to their list of things to do on their yearly vacation to California. Right under “go to San Diego swap meet.” Which, they say, is a good thing, so we will trust them and look forward to seeing them again next year.
P.S. Here, Kelly, is the promised picture of the Doc Martens I bought on Carnaby Street. Yours are much cooler. I don’t think I would wear these to a U2 concert. But that old lady in the picture might.