So you know where I went during my summer vacation?

I’ll give you a hint: it didn’t involve a plutonium powered DeLorean with a flux capacitor.

But it could have.

Because, seriously folks, I went back in time (cue Huey Lewis and the News background music).

It started when I went back to my hometown of Burley, Idaho to watch a little race called the Spudman my husband and brother were in. Not only did I see some people I used to know, but I also took a little tour of the place. And you know what? It hasn’t changed that much in the past twenty years since I left. I could still get a Mexican pizza at the Taco Bandido and a strawberry shake at the Burgers Etc.

Except now there’s a Walmart at one end of town and a lot of empty stores downtown that used to sell nice stuff.

And where once this was the inspiration for folks’ hairdo’s: 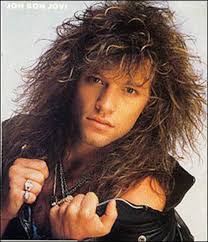 Now it is this: 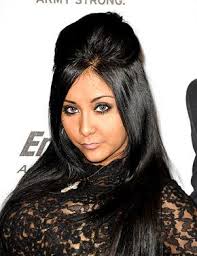 And all I have to say about that is that I think the state of Idaho should ban the import of any more hairstyles from New Jersey.

But back to my vacation.

I spent a number of weeks in the fine state of Utah at my parents’ house where all I did was write and do laundry. Which was a little like going back to high school– except back then I had a job and had to make my bed regularly. My hair was also a lot bigger. Remember?

And you know who else lives there in Utah? Really a lot of people I used to know. So I decided to visit some of them.

Like the two girls who used to babysit for me when my ten year old was just a baby. They, by their own admission, were kind of bratty teen-agers and I won’t disagree with that. But I, also, was once a bratty teen-ager, so I didn’t mind it so much when they were too. I figured they’d turn out all right eventually. And, you know what? They did. Better than all right, actually.

From there I went and got my hair did by the girl who lived next door to me growing up. We took different paths when we got to high school, but we’ve ended up in the same place in many ways. I walked away from our visit with a renewed friendship and a great hairdo–one not imported from the Garden State.

I also ran into an old friend online. I knew him when I was in college and he…well, he was not. But he did have some serious hackey sack and syrup making skills. And though I never actually saw him do it, apparently he could bowl. Like he could have gone pro. Except, in his words, it made his arm too tired to practice that much. So he didn’t.

Guess what he does now…

I’ll just go ahead and tell you because I couldn’t have ever guessed it, so how could you?

He decided to take on the small task of eradicating world poverty. Which, I guess, is somehow less tiring than bowling. So now he has his own consulting business about how to do this and gives lectures — at places like Harvard and Stanford–about the microfranchising model he has created.

I’m not really doing justice to what it is he does, but I think it’s pretty cool, so check it out here, if you like.

But I digress. Let’s get back to my trip down memory lane.

I ended my vacation back through time by attending my 20 year high school reunion. (This is where the background music changes to Bruce Springsteen’s Glory Days, followed by John Lennon’s In My Life, and  that country song What Might Have Been– except all I can remember from it is the tune and those words, but still, it works. Also throw in a few Monster Ballads).

And, boy howdy, did that bring back some forgotten memories. Some of which probably should have stayed forgotten because they were of things I hope my children never, EVER do. But, still, it was good to reconnect with old friends who I didn’t know I missed until I saw them again. We’ve promised to not let another ten to twenty years pass before we see each other again, and–much to my husband’s dismay– I have offered up our home as a free place to stay during any Disneyland vacations.

I hope we’ll keep our promises, but I know life has a tendency to get in the way of good intentions. So I guess I’ll just look forward to the 30 year reunion and think good thoughts about old friends until then.

For now I am back to real life –or what constitutes it in this part of the world– with a serious case of nostalgia.

Because the present just keeps moving toward the future.

Even if you get stuck in the past for a bit.