Remember when I said I would post a picture of my girls’ leopard Christmas dresses that made me happy?

Well I said it right  here. But it’s okay if you’ve forgotten, because it has been awhile since I wrote it. Or since I’ve written anything really, due to the fact that Christmas is kicking my butt. And it’s not even here yet.

So anyway, the best I can do for a blog post today is share the promised picture. 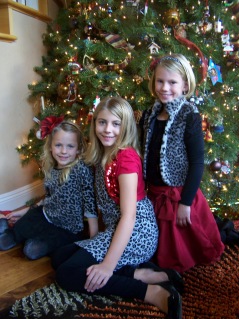 Here’s another picture that my sweet– and talented– friend, Jen took 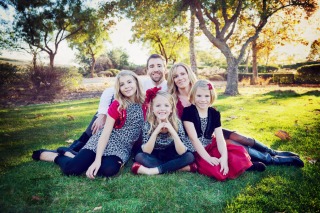 Do you see any differences in their leopard attire? If you noticed that Girl 2 (the one on the right in both pics) is wearing something just a little bit different, you win the award for being Most Observant.*
﻿
How is this girl lucky enough to own not one, but TWO leopard outfits? you ask. Well, I’ll tell you.
She’s not. It’s all an illusion created by the magic of photoshop. Because while Jen was taking the picture I realized it would be so much cuter if Girl 2 were also wearing a leopard top under her bolero jacket instead of the cream one she had on. (Actually I thought this earlier in the day before the picture, but was too busy cleaning my bathroom to go shopping).
When I mentioned this to Jen she said she could just photoshop a little leopard top onto her. But only in the picture. Not in real life. Which meant I had to go shopping that night for one so G2 could wear it to church the next day.
So that’s what I did. Jen was kind enough to join me and, I gotta tell ya, it was kind of a lot of work. There were no gray leopard shirts to be found that would work under her cute bolero. But I did find a black shirt at Kohl’s and a darling little furry leopard vest (faux of course, as I assured G2 who feared an actual leopard had been harmed in its making).
And when I saw “little vest,” I do mean little. Because even though I found it in the big girl’s department and it had an M on it, it was about a size 5. Fortunately, G2 tried it on that night so I didn’t have to break the Sabbath the next day to return it for a bigger size in order to complete the coordinating ensemble I had planned for church. Unfortunately, that was at 10 pm. Fortunately, Target had started their holiday hours. So I headed back to find a big girl vest.
But guess what. That cute, furry vest only came in cute little sizes. Apparently whoever designs for Target has decided big girls should only have ugly, hairy vests. And the biggest little girl size they had in the vest was an L. Which is size 6. G2 is 8 1/2.
But she is little and all the other stores that might possibly carry something leopard were closed. So I took it. And she squeezed into the next day, but kept the tags on. (Maybe I’ve mentioned this before, but she is willing to sacrifice comfort in the name of fashion. Her big sister, on the other hand… not so much).
The beauty of living in a thriving metropolis is the plethora of Targets all within a ten minute drive. So on Monday I went to another Target and found another vest, only this time an XL. Which fits tolerably well and looks pretty darn cute. And makes G2 pretty darn happy.
And the moral of this blog?
Well, there are two really.
1. Shopping should always come before cleaning because, in the end, it will end up saving you time. And picture retakes. (Plus, people see what you wear a lot more often than they see your bathrooms).
2.  If you are thinking “there may be a reason why Christmas is wearing her out, and it doesn’t have much to do with what the season is supposed to be about” you pretty much hit the nail on the head. (And also, I’m not even going to mention the snowflake tutorials I googled so I could make really cool ones–some in leopard print, of course– to hang from my banister).
* Disclaimer: there’s is no actual prize that goes with this award other than the satisfaction of knowing you are good at noticing things. Use this skill at the next baby shower you attend where they play memorize-all-these-stupid-baby-things-before-we-hide-them-and-then-make- you -remember-them (I hate that game). You can win a prize there.
﻿

6 thoughts on “Who Knew A Leopard Print Christmas Could Be So Much Work?”