I’m back (sigh) and I know you’re dying to hear how the cattle round-up and calf showing went, so I’ll tell you. In pictures. Because, you know, a picture’s worth a thousand words and I’m really too tired to type that many.

Cattle Round-Up With Very Few Pics of Cows Because It’s Hard to Be Both Herder and Photographer at the Same Time. Also, I Thought It Would be Impolite to Let Cows Get Away Since Our Hosts Depend on Them for Their Livelihood and Not Just Their Summer Entertainment… 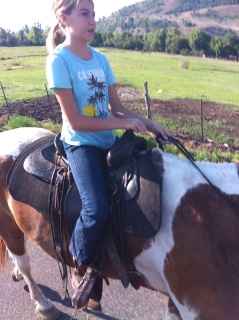 On our drive home I seriously considered packing up and moving to Utah. Mostly so I would never have to do that drive again–because I would already be there.

I also saw a sign just outside of Barstow that said:

End
Lane
Control
And I felt kind of bad because I didn’t even know that lanes were fighting for their autonomy. Then I wondered why– as long as we’re trying to end things–we don’t put an end to Reckless California Driving. We could make public service announcements that say things like:
“Driving a BMW does not make you impervious to death. Not that I’d care if you died, but it also does not make you impervious to killing other people who are choosing not to weave in and out of lanes while driving 120 mph.”
or:
“Do you really want to play chicken with Death right now? Because you’re a pretty short distance from Hell when you’re in Baker, California.”
Ahhh, it’s good to be home.﻿
﻿